In the 1980s, with the end of the Cultural Revolution, China has begun a vast land reform in its rural areas to launch the so-called household-responsibility system, which aims at ending the egalitarian distribution method performed in Maoist China.

1982, a small village in the Hebei Province of North China. With the Spring Festival approaching, Party Secretary Wang asks the villagers to rehearse a classic bangzi opera to impress visiting cadres. The rehearsal, led by Uncle Lu, becomes entangled with land-dividing. The best, most coveted peanut field has been long guarded by Kuisheng, the “Mad Man” of the village. All the villagers then try to put him into exile, except the kind-hearted Xiaofen, Lu’s daughter, who is in love with Kuisheng’s son, Shuman.

Shot in black and white with great humanistic spirit, Bangzi Melody recounts the personal sufferings, political gambling and historical ambiguities as a microcosm of rural China during the land reform. 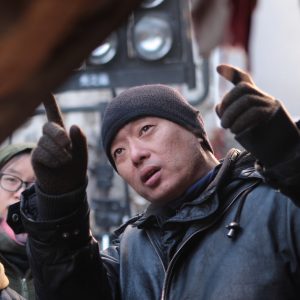 Film and theatre director ZHENG Dasheng was born in a literary family in Shanghai. He earned his undergraduate degree from the Shanghai Theatre Academy before receiving his MFA in filmmaking at the School of the Art Institute of Chicago. Greatly influenced by his grandfather HUANG Zuolin (veteran filmmaker and playwright) and mother HUANG Shuqin (a renowned fourth-generation director), he approaches the art of cinema with great humanistic concern and rich historical reflection. His 2012 feature Falling City was in the Official Selection of the 36th Montreal World Film Festival. Bangzi Melody is his latest feature.