What’s worse than graduating without a job, a boyfriend, or a sense of purpose? Not being able to graduate at all. Riley, an Asian-American girl, is a senior at an unidentified NYC college who is dealing with a yeast infection, a UTI, the fallout of a recent break-up, racial stigma from supposed friends, flailing romantic endeavors with uninterested men, and a future put on hold.

But Riley has met Leo. He’s also Asian-American, living in Philly, handsome, and he listens to her. He must care about her. So Riley decides to shirk all responsibilities in New York to pursue him during a catastrophic night back in Philly. There, she encounters a familiar face that will change the course of events and make her reconcile with her failures and shortcomings in the process of becoming an actualized person. 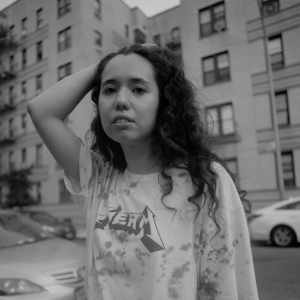 Kit Zauhar is an Asian-American writer, director and actress from Philly, currently living in Chinatown, NYC. Her work explores desire, intimacy, loneliness, and humiliation. Kit attended NYU Tisch School of the Arts where she received her BFA in Film and Television Production. Kit is currently developing her second feature, 2 Men 2 Women, and her production company, Modern Pleasures.

Riley (Kit Zauhar) goes to school in NYC, “studying philosophy”. She was one week away from graduating. But having failed a class, she must retake it and is now a summer away from leaving school and “becoming a real adult”. All the party drinking makes her feel even more lonely. All the unpleasant and inconvenient facets of life accumulate and envelope her like a giant grey cloud of frustration: health problems, bad break-ups, awkward living situation. How she sees the world is reflected by the shaky hand-held camera, the shallow depth of field and the abundant close-ups. Things, events or people go in and out of focus—sometimes they are visible and comprehensible; sometimes they are blurry and alienating; sometimes they get up so close and become suffocating; other times our own tunnel vision isolates the perceived objects from their grounding context, making us unable to empathize with or understand them.

We find uncertainty terrifying, especially the uncertainties of our selves. It is easy to get lost in others’ stories, accomplishments, desires and values. We want to be told what to do and what to say and what to be, because it’s not only much easier than figuring it out ourselves, but also because that way, we can shirk responsibilities by thinking, well it wasn’t me who decided on that.

Riley is just like any other actual human, who wonders why anyone would just stop loving someone after three years or so, or fears that she will never become anything. Like most people, she can’t help but measure herself against others, and then can’t help but feel discouraged at her own insignificance and ‘failures’ in comparison. We rarely find her alone—she is always either sitting next to someone, talking to someone, texting someone, or drinking with someone. She often asks what others’ thought about her or what their reactions were upon hearing something about her, taking solace in the empty shell that others construct for her. All the “beyond desperate” stem from deeply held insecurities and anxieties. It turns out that it takes great courage and wisdom to know or be with oneself, and to learn that one’s own actions and words always have consequences—they could really hurt. Anger and frustration shouldn’t be excuses for moral obtuseness.

And we all have/had to learn, in different ways, that self-worth ultimately comes from within. So did Riley. Perhaps the road to self-knowledge is some form of self-transcendence and the realization that others depend on her as well. A dramatic episode involving her sister at a party led to a painful, but ultimately therapeutic, conflict at home—her repressed pain from the break-up and general anxieties about life re-surfaced and culminated in a breakdown. But it was also coupled with the understanding that she could have better taken care of her little sister, and that her (in)action had consequences that she could be responsible for.

Regardless of whether vaginal yeast can make yoghurt, or whether boba is bad for your health, radical nihilism is not sustainable, but it is also okay to not “have your shit together”. Riley will be okay. She doesn’t smoke when everyone else does. She is persistent and doesn’t mind being offended. Her back-lit hair at night is incredibly beautiful. Importantly, she is excited, once again, about taking the summer class.

In the credit sequence at the end, even though it says explicitly that it is in order of appearance, Riley is the last name among all. Perhaps that is because only toward the end of the film, we have the beginning of her actualized self. This new sense of self gives her courage to be with her own thoughts (sitting on the bus alone looking out of the window, without texting or calling someone) and to say no to impulsive actions that could lead to awkward, if not painful, repercussions.

An unexamined life is not worth living, said Socrates. But an examined one is not easy either. The small triumphs ought to be cherished and remembered, like meeting a new classmate.